Why Can’t This Kid Sleep? 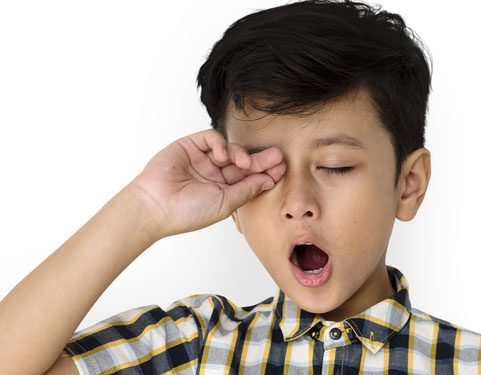 Alana, age 17, comes in complaining that she is tired all the time and struggles to stay awake during school.

Or perhaps it’s six-year-old Miko, whose mother tells you that Miko avoids going to bed and often gets up in the middle of the night. Miko says he doesn’t feel sleepy, but his teachers say he is often inattentive and sometimes quarrelsome.

The most common sleep problems among young patients are these and other forms of insomnia or insufficient sleep, according to REACH faculty member Robert Kowatch, MD, a pediatric sleep expert and professor of psychiatry at Ohio State University Medical Center/Nationwide Children’s Hospital.

Fortunately, in most cases the diagnosis is straightforward, and treatment often consists of behavioral techniques for parents and cognitive behavioral therapy for adolescents.

Sleep problems can be divided into two broad categories, with some overlap:

The differences in diagnosis and treatment between teens and younger children can be fairly pronounced. For this issue, we asked Dr. Kowatch how to deal with children like Miko. Next month, he’ll tell you how to deal with teens like Alana.

“Younger children usually can’t tell you whether they have symptoms of disorders like snoring or restless legs syndrome,” said Dr. Kowatch. “But those issues are uncommon enough that we wouldn’t order a sleep study unless it’s indicated by factors other than insomnia.” One risk factor is a family history of restless legs or sleep apnea. Another is a diagnosis of autism spectrum disorder or ADHD, which are associated with higher incidence of periodic leg movements during sleep.

“For most children ages 2 to 6, the problem is behavioral,” said Dr. Kowatch. To assess the issue, pediatric primary care providers can ask parents about the child’s nighttime behavior.

“We call this a limit-setting sleep disorder,” said Dr. Kowatch. It’s the parents who need to set the limits. Dr. Kowatch recommends the process known as “Ferberizing,” after Richard Ferber, MD, author of Solve Your Child’s Sleep Problems. Parents of young children should:

Children who feel anxious and want adult attention get what they need when caregivers lovingly impose consistent boundaries. “The parents need some coaching,” said Dr. Kowatch. “If necessary, you can refer them to a mental health specialist for sleep behavioral therapy. Many families need just a couple of sessions to develop these tactics.”

When the child’s behavior doesn’t fit the limit-setting profile, clinicians may want to assess risk factors for physical issues such as narcolepsy, apnea, and restless legs. Children with sleep apnea typically snore on most nights and are tired or irritable during the day. Clinicians may also screen for underlying mental health disorders such as depression or anxiety.

Next month: How to diagnose and treat the sleepy teen

“REACH offered a safe environment to learn and share in It was, and continues to be, a supportive, invigorating process! It was motivating and has increased my confidence in assessment, diagnosis of mental health cases in my day to day life and practice.”